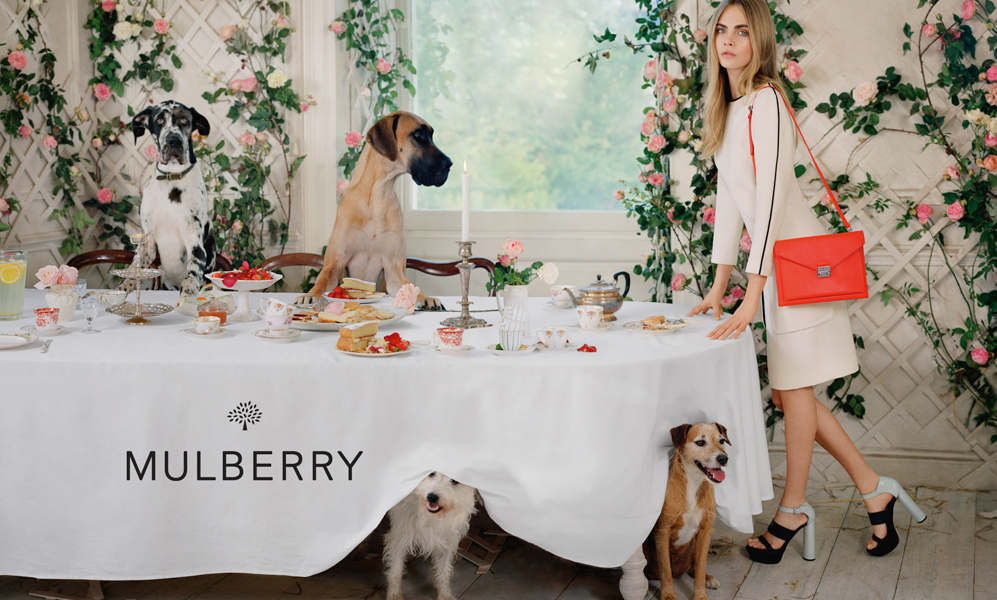 After being the face of Mulberry’s Fall/Winter 2013 campaign, british model Cara Delevingne is at it again for the new Mulberry Spring/Summer 2014 campaign. The romantic setting of Cara’s shooting took place in an English country house during a tea party which was joined by unusual guests including a Parson’s Jack Russell, a Patterdale Terrier, a pelican, two cockatoos, a tortoise and Dusty the little pony. The entire campaign was shot by Tim Walker, with Ronnie Cooke Newhouse as art director and Edward Enninful as stylist.

According to Ronnie Cooke Newhouse: “The Spring Summer 2014 campaign was a beautiful but naughty tea party with Cara and her Ark of animals: The perfect Mulberry moment.” “They didn’t have the best table manners, but Cara was very forgiving…”

Behind the scenes of Victoria's Secret Valentines Day

Inside Pinterest’s all new Headquater

Life
Cara Delevingne Freestyle Beatboxing on Jimmy Fallon
share this post
Currently, British supermodel and coming actress Cara Delevingne can be found across all media. Apparently, the 23-year old…
Load More
Latest Most Viewed
Fashion & Style
Perfect Design and Function: The Sunglasses Collection from Porsche Design
23. July 2020
"Look, a Porsche!" Nowhere would such a phrase be more fitting than with the new eyewear collection from Porsche Design.…
Fashion & Style
Porsche Design presents the matching chronograph for the 911 Targa 4S Heritage Design Edition
23. July 2020
Wherever it says Porsche, there is also Porsche in it. This applies to the sports car manufacturer as well as…
Fashion & Style
Limited to Only 100 Pieces: The Pro Hunter Rolex Submariner Military Watch
30. April 2019
The military look also works without camouflage. Of course, spot camouflage is the most emblematic, but also at the expense…
Fashion & Style
10 Habits That Every Stylish Man Should Have
28. August 2015
The most successful male style icons of our time have something in common. From Steven McQueen to Brad Pitt and…
Fashion & Style
The Evolution of Men’s Hairstyles
5. November 2015
Not only women's hair styles have changed significantly over the last couple of decades, but also last century's men have…
Fashion & Style
10 Reasons to Wear a Luxury Watch on Your Wrist
19. November 2013
A luxury timepiece can be as versatile as the gentleman sporting it. As a collector’s item for the connoisseur, as utility…