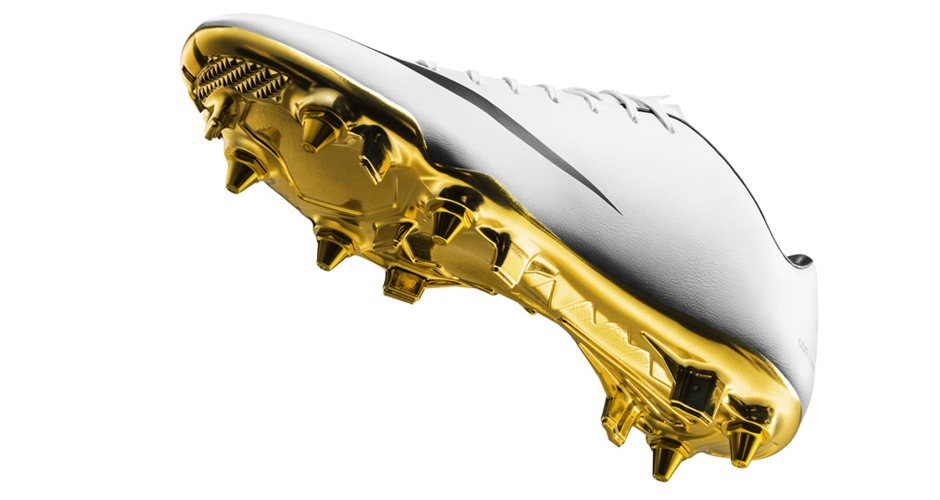 Earlier this year, Cristiano Ronaldo won the FIFA Ballon d’Or and received the title “FIFA World Player of the Year” for the second time. Sponsor Nike has come up with a gilded boot with the name  CR7 Mercurial Vapor IX to commemorate his remarkable season. The special football boots were presented on 8 April.

The Nike Mercurial Vapor CR7 IX is limited to only 100 pairs and each piece has a unique serial number stamped into the sole. Unfortunately, all models were sold out on the day of sale within only few minutes. Though Cristiano is suffering from a knee injury but it’s believed that he will wear the new Mercurial Vapor IX CR7 Special Edition on April 16.

Fashion & Style
Nike Introduces Adaptive Lacing x HyperAdapt 1.0
share this post
Most of us remember Marty McFly's self-lacing boots from the famous movie Back To The Future. And most…
Life
Nike RISE "House of Mamba" LED Basketball Court
share this post
The "House of Mamba" LED basketball Court by Nike RISE which Kobe Bryant introduced on his latest promotional…
Business
Ricardo Tisci and Nike Announce Collaboration
share this post
Ricardo Tisci, creative director and designer of Givenchy, looks back on a very successful year 2013. He has…
Load More
Latest Most Viewed
Fashion & Style
Perfect Design and Function: The Sunglasses Collection from Porsche Design
23. July 2020
"Look, a Porsche!" Nowhere would such a phrase be more fitting than with the new eyewear collection from Porsche Design.…
Fashion & Style
Porsche Design presents the matching chronograph for the 911 Targa 4S Heritage Design Edition
23. July 2020
Wherever it says Porsche, there is also Porsche in it. This applies to the sports car manufacturer as well as…
Fashion & Style
Limited to Only 100 Pieces: The Pro Hunter Rolex Submariner Military Watch
30. April 2019
The military look also works without camouflage. Of course, spot camouflage is the most emblematic, but also at the expense…
Fashion & Style
10 Habits That Every Stylish Man Should Have
28. August 2015
The most successful male style icons of our time have something in common. From Steven McQueen to Brad Pitt and…
Fashion & Style
The Evolution of Men’s Hairstyles
5. November 2015
Not only women's hair styles have changed significantly over the last couple of decades, but also last century's men have…
Fashion & Style
10 Reasons to Wear a Luxury Watch on Your Wrist
19. November 2013
A luxury timepiece can be as versatile as the gentleman sporting it. As a collector’s item for the connoisseur, as utility…