Jeddah Tower in Saudi Arabia: This Will Be the Tallest Building in the World

When you think of skyscrapers, you immediately have images of New York City in your head. However, there have long been other cities whose buildings can easily compete with the skyline of Manhattan. The tallest building in the world is currently under construction in Jeddah, Saudi Arabia.

In political and religious terms, the Saudis may still be very conservative, even though the royal house is now granting its citizens a few new freedoms. In other respects, the country has long since arrived in the 21st century and wants to play a leading role here. The fabulous wealth the oil deposits have brought to the Saudis is largely used for the future project. And what could be more symbolic than architecture?

Burj Khalifa, in neighboring Dubai, designed by American star architect Adrian Smith and completed in 2010, brought a superlative to the region: at 828 meters, this building is currently considered the highest in the world.

It is Adrian Smith, of all people, who wants to surpass himself with the Jeddah Tower. With 1007 meters, the 1-kilometer mark will be broken for the first time. In view of this, the estimated 1.2 billion euros in construction costs almost seems like a bargain. 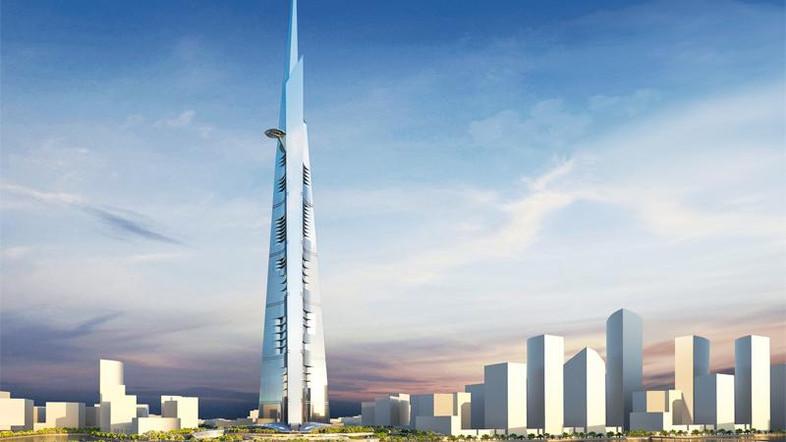 Why is Jeddah Tower being built?

The fact that the planned height is necessary due to the availability of land would probably be implausible, therefore such an argument is not known. Perhaps one simply wants to show what great achievements people are capable of. And the Saudi royal family certainly wants to set a monument to itself with the Jeddah Tower. In view of this, the utilization concept seems almost trivial.
Offices, apartments, a 5-star hotel and various tourist attractions are to be built here – although not much is known yet about the latter. However, it is already clear that a viewing platform will be erected at 664 meters above sea level (and thus at record height!). The scenic conditions at this height in Saudi Arabia will boast a fantastic view. With optimal visibility and weather conditions, one will be able to look over the Red Sea to the African continent 230 kilometers away.

The Jeddah Tower will also become the basis for a new economic and commercial center, around which new buildings will be added in the future. It is unmistakable in this regard that the Saudis have long since begun to compete with Dubai.

This could also be of interest to you: The Future Highest Building in the World: The Tower in Dubai