Spending time with a car is always the best way to learn what it’s all about and how it feels to live with. Recently, we had a chance to drive the Range Rover Evoque Autobiography.

Speaking of a while back, actually around Christmas time, mr.goodlife and team were invited to an event at Eastnor Castle to sample some of the cars from the JLR range on and off-road. One of those cars was the Evoque, and after putting a Discovery 4 through its paces on an off-road course, we figured the Evoque on the same challenging off-road course would be a little more difficult to conduct. We were wrong. The Range Rover Evoque is an extremely well built car. Driving up and down these extreme slopes and deep water wading, we realised this car can certainly handle the elements, but what is it like to drive on the road?

Here we are a few months later, on the road in an Evoque Autobiography. The Autobiography spec has some sweet key features, such as 20” 5 Split-Spoke alloy wheels, keyless entry, adaptive headlights with LED signature, full Windsor leather interior, surround camera system and the incredible Meridian sound system. From the exterior, it definitely looks best out of the Evoque family. With its wide, aggressive bumpers and body styling, it stands out as an urban crossover car with attitude. We like it. I would definitely go with the Autobiography spec on this car. It really separates you from the rest of the Evoque’s on the road and its like we always say at mr.goodlife; It’s in the details. 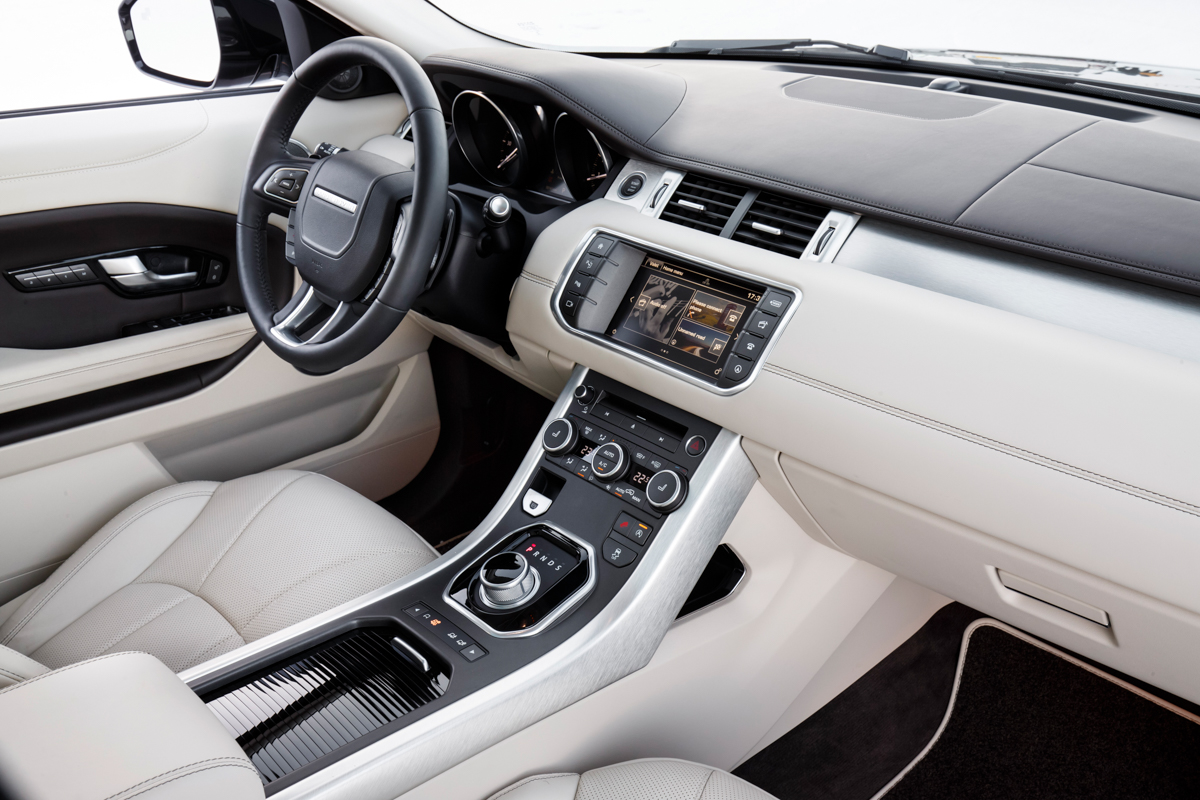 The car will do 0-60mph in 6.9 seconds and hit a top speed of 135mph, which are both more then satisfactory for a car of this nature. The engine variant we drove was the 2.0 Litre Diesel (240hp) with a 9-Speed Auto Transmission. She has a combined consumption of 48.7 MPG so absolutely nobody is complaining here. The Range Rover Evoque has a wading depth of 500mm and an obstacle clearance of 211mm which makes it perfect to entertain all of your offload desires and most importantly classifies it as a Land Rover vehicle. Built For Adventure.

Off For A Drive

Driving this car is fun and engaging. You have great visibility all around and a great driving position, which is perfectly balanced between the height of an SUV and the ride comfort of a sporty coupe. There is an intelligent firmness to the car when cornering and just enough of a comfy, rolling, bouncy SUV feeling when generally manoeuvring around. The car is obviously well understood in terrain response and it detects where and what surface you are driving on. This ensures you get the best out of all situations on the road. One of the best features to play with is the All-Terrain Progress Control (ATPC). Its kind of like an off-road cruise control, which will get you up and down slopes of snow, mud or gravel at a steady speed in reverse or drive. It really makes light work of the obstacles ahead and you could literally be having a chilled conversation about the mr.goodlife travel section, whilst being driven up some rocks and mud slopes in the rain. Pretty Awesome.

Conclusively, we wanted to drive this car to see if it meets the standard of the other Range Rovers in the JLR collection. We love and respect what Land Rover has been about since the brands early beginnings and we treasure the stories of its heritage. With the Evoque out now and becoming so popular, you can guarantee that people aren’t driving it just because it looks good… It is a Land Rover through and through. More info right here @ Landrover.

Cars
Special Vehicle Operations Play Day With JLR and mr.goodlife
share this post
As you may know by now, at mr.goodlife, we love to play with the coolest toys and our friends…
Cars
Highland Touring in The Range Rover SVAutobiography
share this post
It was a winters day in London, United Kingdom and our friends at Land Rover had just delivered the…
Cars
The “Special” Range Rover Sport SVR
share this post
This is the Range Rover Sport SVR #JustSayin right now before we even begin. The Range Rover Sport SVR is…
Cars
King Of Comfort - The Range Rover Vogue SE
share this post
As a new days sun greets us from the window of a plane at 30,000 feet. The pilot…
Cars
Lush Life - The Range Rover Sport Autobiography
share this post
Let me start by saying this. There are not many other places out of your own home you…
Load More
Latest Most Viewed
Cars
Fully Digital: This is the new Audi A3 Sportback
18. March 2020
A lot has happened since Audi laid the foundation for the premium segment of the compact class in 1996 with…
Cars
The fastest SUV in the world: Audi presents the RSQ8 in L.A.
21. November 2019
At this year's LA Motor Show, Audi once again shows that it ranks among the top ranks in the ranking…
Cars
World Premiere in L.A .: This is the Audi e-tron Sportback
20. November 2019
Los Angeles is known for spectacular premieres due to Hollywood and its movie studios. The Audi presentation on 19.11.2019 at…
Cars
LaFerrari vs P1 vs 918 Spyder 0-186 mph Drag Race
20. November 2015
TheSUPERCARDRIVER just released their world exclusive shootout with the LaFerrari, P1 and 918 Spyder, taking the three cars to the…
Cars
This MegaYacht by CRN Is The World’s First Floating Garage
6. October 2014
The Italian shipyard CRN is known around the world for extraordinary and extravagant yachts. Now, the shipyard in collaboration with…
Cars
Inside Donald Trump’s $100 Million Custom-Built Private Jet
14. June 2014
With a fortune of more then $ 5 billion, Donald Trump is one of the richest entrepreneurs in the world.…